So after my review of the Ice Vibe boots I had messages from a couple of people asking if I had tried Cryochaps...Cryowho?? I’d never heard of them so hit the google for a bit of research. Cryochaps is a relatively new, small company based in the UK who sell ‘The indispensable ice wrap chap for horses post exercise & post injury for every discipline’ (to read more see http://www.cryochaps.co.uk). As Romy had been mildly lame high up on his suspensory, a couple of people had suggested that Cryochaps would be a better alternative to the Ice Vibe boots because they have a greater surface area which reaches right up to the hocks.


At very first glance on the website, the first thing that I noticed was the price. At just £85.50 for a pair, they are very reasonable. And even better, you can buy one for £45 if your horse is recovering from a one legged owie or if like me you’ve had an expensive summer making the most of the sales on Hope Valley Saddlery and Premier Equine so can just about afford one boot at a time!


The boots arrived in a lightweight carry bag and felt like good quality that would last the distance. As with any ice boots, I would like the option of buying an ice box / ice bag to transport them to the yard in but having spoken to Tricia at Cryochaps I believe they are planning to offer these in the future. Romy had some time off after the last competition...more on that in my next post, but he had basically forgotten How To Horse. Rolls eyes. Again. And I also had some time away because I had forgotten How To Human so a holiday was needed for us both. So I’ve been trying out the boots for about 2 weeks now, following his time off. 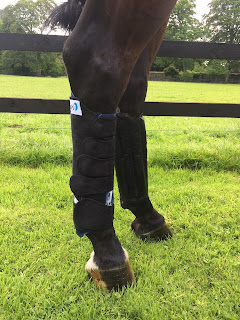 The boots are easy to freeze and easy to put on. There is a marker on each boot to tell you if it’s the right or left boot so you don’t have to fiddle about too much and waste precious cooling time. The coverage area IS good, as you can see from the below (Cryochap is closest to the camera in this image, alternative ice boot is furthest away) and the gel that is inside the chap is very malleable so also allows for a closer contact to the leg. As a reminder, my horse is a very leggy 17.2 warmblood so you can see that the boots reach those hard to get places. But one of my favourite things about these boots was the way they are applied. They have four straps which go around the leg and one strap which goes around the fetlock. And it meant that I could really put the chaps on quite tightly. I’ve found with other ice boots that as the ice cools down and turns to liquid, they end up quite loose around the leg but I was able to ensure a very close contact with the ice packs with these. Likewise, some alternative boots offer an additional top boot which helps you to get a close contact with the horse, however they are often big and bulky and from my experience they heat the ice pack up quicker so you have to take them off sooner. The straps on the Cryochaps are incredibly lightweight so I don’t think they had an effect on the length of time the chaps stayed cool. 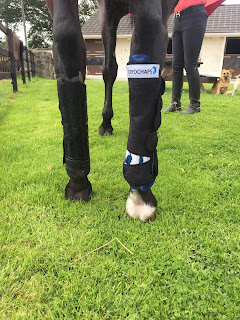 And the big tester was when I took both boots off (I kept them on for 15 minutes), the leg which had the Cryochap on it was much colder from his fetlock right up to his hock and stayed colder for longer, compared to the alternative ice boot. Negatives? I think my biggest negative with these boots involves the straps (which are also my favourite thing about them...go figure!). With other ice boots, which are all plastic and just need a wipe down to clean, the straps on the Cryochaps are material. This does allow for a close contact but it also means the boots need to be properly washed if dirt / horse poop gets on them. However, for a better cooling result I’m happy to give them a proper clean every now and then.


In summary;
Value for money: 9/10 At £45 per chap it means they are affordable for most people and I like that you can buy per chap, rather than having to buy in a pair.
Comfort: 10/10 I’m not sure what could be done to make these more comfy on my horse, they fit him well and he was able to move about freely with them on. There was no pressure points once they were on, unlike some other boots.
Negatives: The material straps mean you would have to properly clean them rather than just give them a wipe down. I also found them a bit twiddley to put on the first couple of times but then got the hang of it!
Positives: Great quality, great coverage area and I think the best price for good quality products that are currently on the market.
Overall impression: Definitely something you should consider if your horses injury is high up on his leg or your conscious about cooling from the fetlock right up to the hock; a good, innovative addition to the ice boot family that ticks a lot of boxes.
Would I recommend: Yes, especially if your horse suffers from PSD or issues pertaining to the higher part of the leg. Even horses that have issues in the fetlock would benefit from these boots because they do stretch down to the fetlock and are secured neatly with the bottom strap.


I want to point out that I have no affiliation with neither Ice Vibe nor Cryochaps but if my review helps buyers figure out what is best for their horse then I’ll always give an honest review. I also want to point out that while people asked me to compare them to the Ice Vibe boots, I can’t really as they are a different product. The Cryochaps don’t vibrate. They are a cooling ice wrap so if vibration before (or even after) exercise is something which you think would benefit your horse then the Ice Vibes are a great choice. If you’re more focussed on gaining a better cooling surface area on your horses leg or have limited funds, I would go for the Cryochaps. And as mentioned, horses who have suffered from injury high up on the leg, such as PSD, may find the Cryochaps work better for them. If anyone has any thoughts or comments I’d be happy to hear them!

In my next post I will get back to my dressage journey with Romy...who is keeping me on my toes, as always! So for now I will leave you with a couple of photos of our most recent matchy matchy sets (see paragraph 2 above!).

Victoria O'Carroll
A keen horse rider since I was a child I only really started consider dressage in 2011. I got a feel for competing and now like to get out both riding and spectating in Ireland and the UK as much as I can. I often feel like I'm completely bluffing my way through this dressage thing, but I've been lucky enough to train with amazing trainers in Ireland, the UK and Portugal who have managed to steer me up to competing and training at a higher level than I ever though I would get to. I've also been lucky to have some super horses in my life and this blog outlines my journey from my decision to buy my first dressage horse right up to where I'm at today. I like to think big and aim high so I don't want to say my plans for the future contain anything other than achieving my goals. I hope to make it to Grand Prix some day but have quickly come to realize that it's not always that easy and so many obstacles get in the way. It makes me appreciate how special the Grand Prix horses really are.